CHECK IT OUT AT COLORLINES.COM. 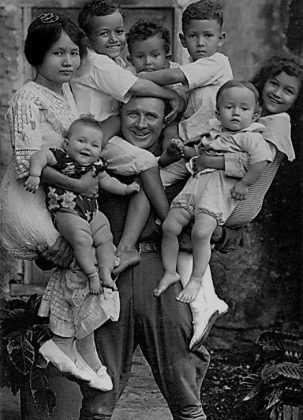 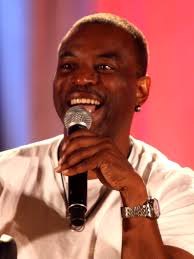 Read about it at Kickstarter.com. 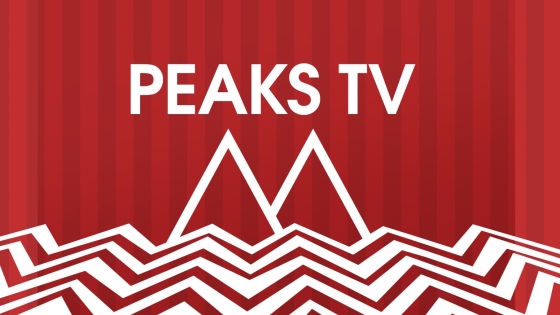 Listen to the podcast, hosted by Mahvesh Murad, at Tor.com. 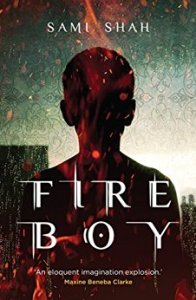 Read more about it at Blackgirlnerds.com. 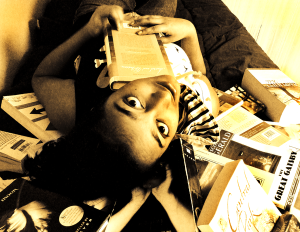 Jessica Williams on The Daily Show

LINK: CHECK OUT ERICA’S ON THE SPOT REPORT HERE 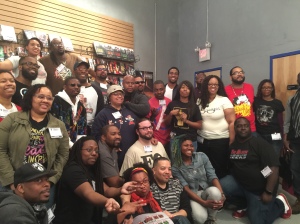 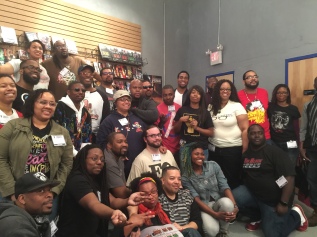 The idea of “community” has become a cliché. It’s easy to fake from a distance but close up, tone of voice, body language and seemingly unimportant gestures loom a lot larger. We blerds (and associates) were packed in last Saturday at Philly’s own Amalgam Comics and Coffeehouse for the Blackfinity Gauntlet Black Podcasters Meet-up — and only the most delusionally cynical could have poked holes in our closely-knit cloaking shield. No out-of-control egos, condescension or shade detected.

The meet-up couldn’t have been held in a better space. All of this nerd love was flowing in the first-floor warehouse space that Ariell Johnson transformed so successfully at Frankford Avenue and Huntingdon Street in Kensington.

Even with the well-designed combination of open aisles, well-placed shelves, and cozy seating areas, I was a little overcome by the size of the crowd on Saturday. By overcome, I mean thrilled. Black nerds were everywhere, buying merch, drinking coffee, eating chocolate croissants and mini sweet potato Bundt cakes (ok, that was me), and communing hard.

I’d managed to drink my first and long awaited coffee of the day without spilling it on anyone and accumulate a pretty nice haul of comics by the time the podcasters panel started. Moderated by the host of Geekin’ Over 40 and co-creator of The Black Geeks Big Baba Rob, the event had drawn a full-on crowd by the time I ambled over to find a seat wasn’t in the cards. 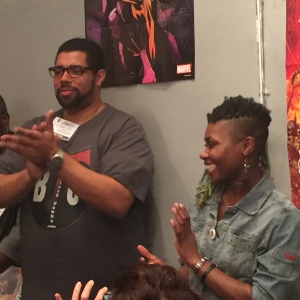 Both panel and audience dug into a real discussion about the issues encountered in the effort to be a successful podcaster, the particular needs, trials and joys of running a podcast in the black nerd world, and ultimately, what it means to have an authentic, yet accessible, presence in a world of white media.

Storm, one of the Black Tribbles, remarked on diversity, even among black nerds: gamers, comic book lovers, superhero nerds, horror aficionados, and sci fi fans. And, I learned a few things by being in a room filled with so many different kinds of expertise. During a trivia round, I was lucky enough to be standing next to writer, consultant, and editor of DC’s Batman line of comics Joseph P. Illidge, who informed me Superman isn’t just vulnerable to Kryptonite, but to magic, as well. Who knew? (A lot of people, I know — just not this gal.)

With experts like Illidge in the room, it was easy for me to feel at a loss when it came to my own experience. But it was also reassuring to be surrounded by people who know what the hell they’re doing. Thank god, I wasn’t the only one. Podcasters at all levels took care to name mentorship and mutual support as two things necessary to thrive in the world of black media.

Both Jamie Broadnax and the Potbelly Samurai gave real life examples, attributing their podcast successes to Geek Soul Brother’s mentoring. Jamie let us in on the fact that she committed to starting a podcast while she was on air as a guest on Geek Soul Brother’s show. That day she thought to herself: “Well, it’s on record. It’s indelibly printed forever that I said I was going to podcast.” She did, and is now helping others make the same trek.

Also, during the Q&A, Graveyard Shift Sisters’ Ashlee Blackwell offered up seemingly simple, yet profound, advice based on her experience co-hosting the Girls Will be Ghouls podcast with Zena the “Real Queen of Horror.” In this age of frantic phone-checking, account-monitoring, and fleeting successes, she reminded us: “Have patience — with yourselves, with your brand, your cohosts, with your content — everything.”

Birthing and nurturing a podcast, blog, production company or one-time creation takes just that. Even when you believe in what you’re doing it’s surprisingly easy to question yourself, your work, and the resources it takes. And, isolation can be a monster. We need to remember that none of us are in it alone and that each of us — even the newbies with their truly insightful questions — has something valuable to give.

In the words of Big Baba Rob: “Each one, teach one.” That practice is proving to bring more and more of us to a place of achievement in a larger environment that can be daunting and often hostile. But all that negative energy seemed surmountable that afternoon because we weren’t taking our community or our opportunities for granted. It’s hard not to be grateful on such a day.

For a list of podcasts by people of color, go to: Podcastsincolor.com. 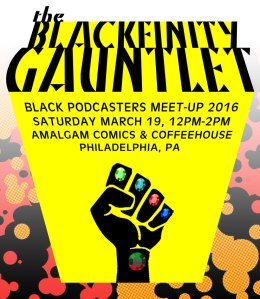 The Dark Matters twosome is shivering with anticipation. We’d love to see you there!