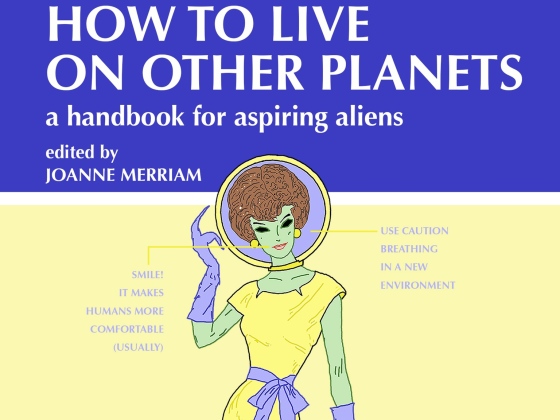 After a successful crowdsource campaign, this March Upper Rubber Boot Books dropped the sci-fi anthology How to Live on Other Planets: A Handbook for Aspiring Aliens. This collection explores the immigrant experience in a science fiction setting, with exciting fiction and poetry from some of the genre’s best writers (including DARK MATTER faves Lisa Bolekaja, Nisi Shawl and Daniel José Older to name just a few). DARK MATTERS was wildly enthused about the book’s concept and campaign and upon its release we were fortunate enough to chat with editor/contributor Upper Rubber Boot’s Joanne Merriam.

DM: Can you tell us a little about Upper Rubber Boot Books? When it started, who started it, what you publish, your biz mission?

Joanne Merriam: I started Upper Rubber Boot in 2011 in response to the poor formatting of most mainstream poetry ebooks. I am a poet, and have some experience with web design, which I used to do on a freelance basis. I noticed that the poetry books I was buying appeared to have been run through an automated system to turn them into ebooks without much care being put into their formatting. I had often dreamed of starting my own press, and this seemed like an opportunity to do something better than the bigger presses were managing.

I quickly discovered how much of a money-sink publishing poetry is, so I started publishing fiction as well, and have settled into a routine of doing roughly one anthology or short story collection for each poetry book I put out. The anthologies pay for the poetry, and I love putting them together.

I have taken on an acquisitions editor, Andrew McFadyen-Ketchum, who edits our annual 3-in-1 chapbook series, the Floodgate Poetry Series. Otherwise, I do everything myself, in my spare time after I get home from my day job.

My main interest is in the gray area between the genres of literary fiction and speculative fiction (which comprises magical realism, science fiction, fantasy, etc.). A lot of books fit into both genres, in that they have speculative elements in their plot or world-building, but have a literary approach to language. Where they get slotted seems to be a function of marketing, that is, where their publisher thinks they can sell the most copies. However, some people treat these divisions like they are hard lines, and I wanted to put out books that appealed to both groups, and do my own small amount to blur those lines.

DM: What inspired How to Live on Other Planets: A Handbook for Aspiring Aliens?

Joanne Merriam: I’m an immigrant – I moved to the US from Canada in 2004, following my marriage to my American husband. The term “alien” gets used a lot to describe immigrants, and it seemed like a natural leap to have a collection about alien aliens, in both senses of the term. I looked around and was surprised to not be able to find an anthology along those lines, so I decided to put out my own. I placed a call for submissions, and was lucky to get some really amazing work submitted!

DM: How did you go about calling for submissions?

Joanne Merriam: I call for submissions on the URB website (http://www.upperrubberboot.com/) and then link to the call on social media (Facebook, Twitter and Tumblr) and on a few email lists I am on (eg the Strange Horizons contributor list, and the women in poetry group). On Facebook, I tag several hundred writers I know, and encourage them to tag their friends, plus I post on some writer group pages. A lot of people retweeted or reposted my call, which helped spread the message.

I don’t usually start reading ’til after the deadline, but about a month to six weeks before the submission deadline, I do a quick look at the names in my inbox, and see what proportion of submitters are people of color and what proportion are women (where those things can be easily determined) and post calls explicitly asking for submissions to balance out any deficits. It’s been my experience that if the submission pool has a healthy diversity, then the book will too.

DM: Were there any particular authors or stories you were determined to get?

Joanne Merriam: There were a few authors I specifically wanted to submit (Ken Liu, Mary Anne Mohanraj, RJ Astruc, Pinckney Benedict, Nisi Shawl), though no specific stories I had in mind (that has happened with other collections though). Several of them submitted with no prompting from me beyond tagging them on the Facebook post, and I reached out by email to a few others.

DM: Are there stories that were written specifically for the collection?

Joanne Merriam: None of the stories were written specifically for the collection. It’s a reprint collection, which means all the stories have been published elsewhere first. I prefer to publish reprints because Upper Rubber Boot Books isn’t big enough to pay a pro rate for first rights, and I don’t like to ask writers to submit for less money (this is in many cases their livelihood). This does mean that people who read widely in sci-fi magazines and anthologies will have seen some of the stories already.

DM: Were any of these authors/poets new to you?

I forget now if I first encountered Indrapramit Das through the anthology or through a short story project I was working on at the same time, the Soles Series (through which another of his stories is still available as an ebook). Nick Wood also had a story accepted in that series, though we didn’t put it out before the series was discontinued.

The writers I’d worked with in the past were Celia Lisset Alvarez, RJ Astruc, Lisa Bao, Pinckney Benedict, Tina Connolly, Peg Duthie, Julie Bloss Kelsey, Ken Liu, and Deborah Walker. Most I knew from previous anthologies, although Peg Duthie is a friend, and she and Astruc are both writers who have full-length collections through Upper Rubber Boot.

The remainder were writers I’d never worked with before, although I had read their work in various magazines and in some cases were Facebook friends with them. I have about 1,500 writer-friends on Facebook, most of them people I’ve never met; it’s a great place to network (alas, since I deplore the company itself) and I will friend back any writer who friends me.

DM: How long did the collection take to put together from start to finish?

DM: Have you focused on SFF/speculative fiction in any other URB project?

Joanne Merriam: It’s my main focus apart from poetry. Our other March 2015 title, Choose Wisely: 35 Women Up To No Good, was also mostly speculative fiction, including stories by Joyce Carol Oates, Cat Rambo, Amina Gautier and Nisi Shawl. The next book I’m putting out is a literary rock’n’roll novella, Flight 505 by Leslie Bohem, and then I’ll return to speculative fiction with a novella set on another planet, Memory by Buenos Aires writer Teresa P Mira de Echeverría and translated by Lawrence Schimel.

Our next anthology, due for release in 2016, will be an adventure sci-fi anthology called The Museum of All Things Awesome and That Go Boom. I’m still getting back contracts, so we haven’t announced the table of contents yet, but I can mention that it will contain Ali Znaidi from Tunisia, Christina Sng from Singapore, and Estíbaliz Espinosa from Spain.

DM: Will you do another POC focused and/or SFF/speculative collection?

I think that every anthology should have a reasonably diverse collection of voices, and part of that diversity should of course include POC. I may do another immigration-themed anthology in the future, though, since it’s a topic that is so important to me.

DM: What has reception/response to collection been like so far?

Joanne Merriam: It’s been pretty great, better than previous collections I think. It’s always hard to judge this early in the process – the book was only released a month ago – but so far sales have been good and people have been intrigued by the theme. Publishers Weekly didn’t love it, unfortunately, but all the other reviews have been very positive.

I went to the AWP (Association of Writers & Writing Programs) annual conference a couple weeks ago, and How to Live on Other Planets was a popular seller there. A lot more people had heard of it than I’d expected, too, which was tremendously encouraging for such a small press!

HERE’S THE DEETS ON THIS AMAZING PROJECT:

Available in Paperback and ebook, buy it from your local bookstore if they order through Ingram, or from Alibris, Amazon, Barnes & Noble, Chapters, Kobo and Weightless Books.